The University of California Los Angeles Library opened a new online exhibit, The history of Belarusian vyzhyvanka March 3, 2021, with a discussion panel attracting more than 100 people from more than 30 universities and ten countries. The exhibit and accompanying digital audiovisual archive showcase the work of Prague-based Belarusian artist Rufina Bazlova who has become well known for her digital textile collages based on the political and social upheaval surrounding the August 2020 election in Belarus.

The program opened with an introduction from UCLA librarian for Slavic, Eastern European, and Central Asian Studies Alena Aissing who noted that the program itself is a means of protest in solidarity with the voices of those oppressed in Belarus and that the works seen in the program were emblems of artistic resistance.

Belarusian-American scholar, activist and the exhibition’s curator Sasha Razor noted that many Belarusian artists turned to the medium of embroidery during the 2020 unrest, and while textiles have been used politically in the west for ages, textiles as a mode of protest is a more recent development in Belarus and has become popular in the last ten years.

Bazlova introduced her work stating that she had felt the emotional tug of her Belarusian roots watching the protest action and police violence in the streets of Belarus via the internet from her current home in Prague, and had been inspired to start embroidering what she was seeing. Originally working with needle and thread and then scanning her work, she started to create digital collages using the language of Belarusian-inspired cross-stitch, a type of counted thread embroidery, as it was easier and faster to produce given the daily incidents in Belarus that provoked her.

While many of Bazlova’s pieces are uplifting portraits, such as Women in White displaying the power of women in their protest against a corrupt state, other pieces like Brutality in Prison showcase this corruption depicting two prison guards with truncheons beating a detained protester who has blood leaking out from between her legs, echoing the many media reports of actual and threatened sexual violence used against the protesting citizens of Belarus, most of whom are women.

Working in embroidery, Bazlova noted that Belarusian embroidery has a language of its own and that to understand it, viewers must know the language of ornament, and thus she was inspired to work in pictograms, rather than within the Belarusian ornamental canon, so that her work could be easier accessible to more people. While her pictograms are not strictly Belarusian per se, the artist’s use of color and digital material are more so. The canvases are scans of undyed linen cloth on which Bazalova digitally embroiders with red threads. The red and white dichotomy translates the history and ideas of the Belarusian people–a sign of Belarusian national culture. Within Belarusian embroidery red is the dominant color, always complementing and never overwhelming its white base.

Since the start of the coronavirus outbreak in 2020, libraries have reported greatly increased usage of digital content and virtual programming. University libraries, like UCLA, have had to find new ways to deliver programming, collaborate, and connect with users and their communities. At the time of the programming the library was still closed due to coronavirus restrictions.

UCLA alum Razor, who had curated in-person Belarusian art exhibits at the library in pre-pandemic times, worked with the library, UCLA’s Department of Slavic, East European, and Eurasian Studies, and the university’s center for digital humanities, Humanities Technology, to create, build and host the program online using Zoom, Adobe Spark, UCLA’s HumSpace and Omeka platforms. The program’s website https://bazlova.humspace.ucla.edu/ serves primarily as a public archive for Bazlova’s work and Razor said that she specifically chose Omeka for its visual archiving capabilities. This collection through the creation of this digital archive has become part of Belarusian and global digital semiospheres where it functions as a generator of meaning–creating new information, transmitting Belarusian culture and allowing for new cultural and artistic links.

There is also an easy-to-navigate multimodal curator’s tour of the exhibition seamlessly tied together with contemporary multimedia clips in English, Belarusian and Russian to provide background information on the events still happening in Belarus. The tour includes about 30 of the artist’s work, grouped together thematically. While most pieces are one frame, others are triptychs or multi-framed. The artist said she was inspired by comic books and graphic novels and this is how she produced some of her pieces including her early work Ženokol, a comic she embroidered in two parts, including as a border on a dress.

Creating in the artistic language of her people and Bazlova’s use of instagram to highlight her art online works and many mass media outlets, specialty publications, art organisations and scholars picked up her creations. Since August, Bazlova has exhibited in Czechia, France, Germany, the Netherlands and is scheduled to show in Kyiv at the Mystetskyi Arsenal opening March 25th. This is her first solo exhibition in the United States. 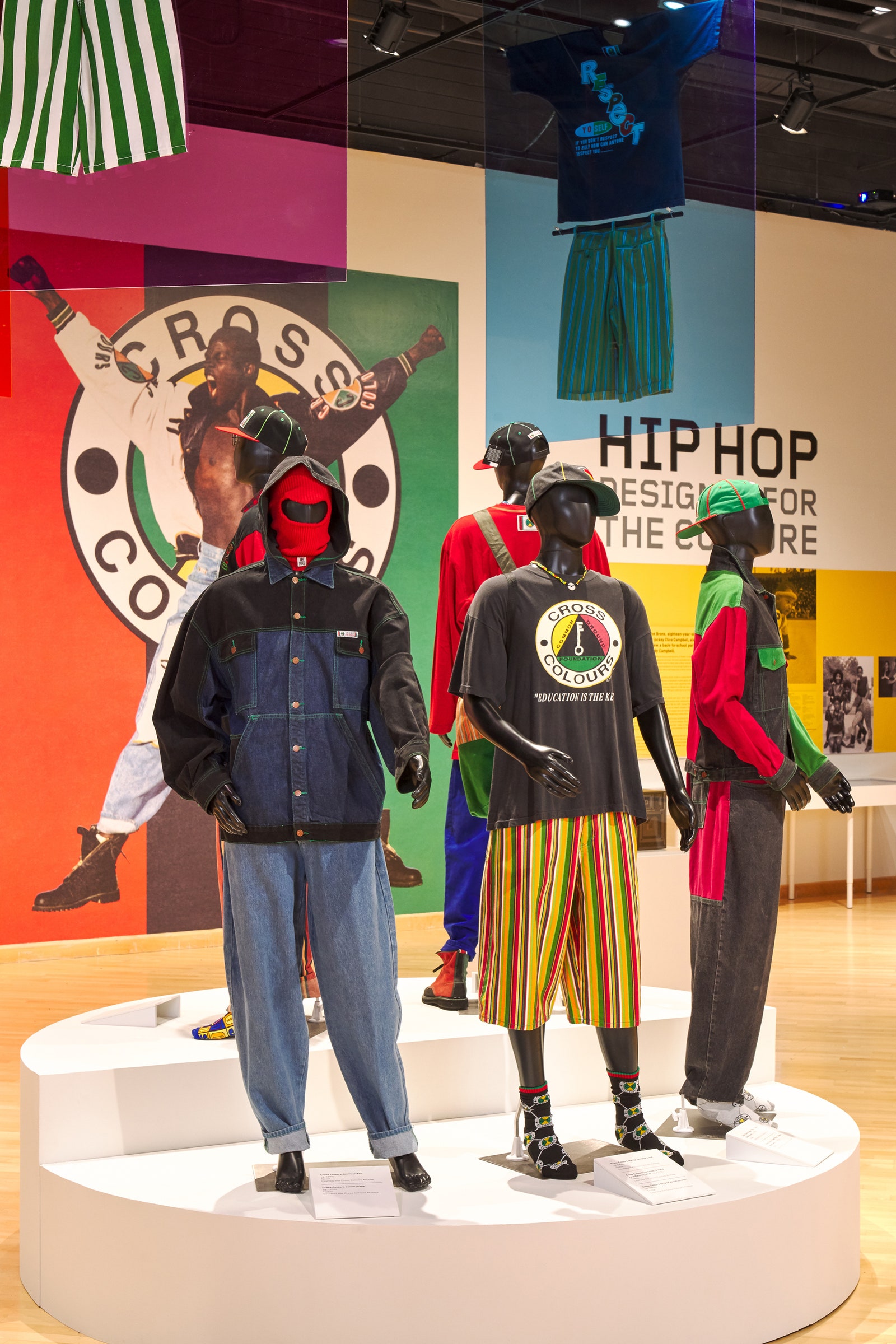 What: Cross Colours: Black Fashion in the 20th Century
Where: California African-American Museum
When: September 27, 2019 – March 1 2020

“Cross Colours: Black Fashion in the 20th Century showcases vintage textiles, media footage, and rare ephemera that illuminate how Cross Colours has permeated popular culture and how fashion can be used to tell history anew.”

Taking some time off this summer? Traveling? Here are some museum fashion and textile exhibitions throughout the US these next few months.

Heading to NYC? Be sure to check out The Met’s Camp: Notes on Fashion “which examines how the elements of irony, humor,

parody, pastiche, artifice, theatricality, and exaggeration are expressed in fashion.” This show runs through September 8. The Museum at FIT is exhibiting Minimalism/Maximalism through November 16. The show is “devoted to the historical interplay of minimalist and maximalist aesthetics as expressed through high fashion.”

Is a trip to Los Angeles in your summer plans? Two shows of interest are at the FIDM Museum. BA in Design is a student exhibition running through the end of June. Starting in mid-August, catch the Art of Television Costume Design. Over at LACMA, check out Power of Pattern, an exhibition of Asian ikat robes and panels until August 11.

If you’ll be traveling through the Midwest, take a detour to Kent State University in Ohio. Two exhibitions are up this summer. Focus: Fiber 2019 is juried exhibition of contemporary fiber art and Fashion Meets the Body highlights work from the University’s faculty.

Or stop over in Chicago to see Weaving Beyond the Bauhaus at the Art Institute of Chicago, opening at the beginning of August. MCA has two shows of interest: Jessica Campbell’s textile works (through July) and Virgil Abloh’s fashion (through September).

If you’re coming to my city, Philly, there are a few fashion treats awaiting you. Souls Grown Deep, to September, at the Philadelphia Museum of Art is an exhibition of Southern African American textiles and artwork. The Fabric Workshop has Sonya Clark on display through August and Bill Viola through October.

Head south and view both Asian textiles and Dior at the Dallas Museum of Art. Sheila Hicks is exhibiting at The Bass in Miami. Atlanta has two shows for textiles lovers: Hand to Hand showcases southern craft until August 4 and SCAD FASH has Mary Katrantzou on view until July 28.

Know of fashion, textile, or costume exhibitions in your neck of the woods? Share with us!

The Metropolitan Museum of Arts’ Costume Institute’s 2019 exhibition, Camp: Notes on Fashion opens May 9 and runs through September 8. The exhibit showcases hundreds of objects from the seventeenth century through today. Just what is camp? Watch the Met’s video on the exhibition to find out.

The exhibition theme is framed around Susan Sontag’s essay Notes on Camp (1964). You can freely download the essay from Monoskop. Sontag includes clothing as a large part of camp, “emphasizing texture, sensuous surface, and style at the expense of content.”  Observer reviewed the exhibit and highlights some of the campiest of costumes included.

Of course, you can also see how celebrities interpreted the camp theme at last night’s Gala. Vogue and CNN have plenty of photos from the red carpet. Find out what camp means to Billy Porter.

Follow the hashtag #MetCamp and get a copy of the catalog for your library!

“The fashion industry in all its forms was one of the first industries to offer Richmond women of diverse backgrounds and colors an accepted professional path with prospects for personal agency. Communal participation is central to the success of the fashion industry. Through word of mouth, one woman’s social network can become another’s client base. At the same time, many of the Richmond women working in fashion have used their professional connections and successes to bring attention to the city and its industries.

In a superb display of high fashion and low from the 19th century to the present day, Pretty Powerful: Fashion and Virginia Women will examine the role of fashion in the professional, creative and social advancement of women in Richmond, Virginia.”